The Story of Horace

so. i'm working on two projects at the moment. one, is by definition, a very bitty and eccentric idea which allows me to pop down the maddest of concepts as and when i think of them. but the other, tentatively entitled "bunny mcsniff and bruiser mcgann", is much more structured. it is also, to all extents and purposes, an extension of what i was trying to do with the hadrons - me having a go at children's picture books

my interest in children's picture books has been slowly but steadily developing over the last couple of years. partly it was a way of extending my interest from simply comics, to the punch cartoonists i grew up with (i was an odd child) and then onto other forms of graphic art. and also partly because i began to realise in no uncertain terms that the best picture books are among the greatest pleasures anyone of any age can have. it's been an absolute delight to uncover new and wonderful things and chief among those joys is finding something like "the story of horace"

i can tell you *exactly* where i first came across "horace". i follow a lot of children's book blogs for inspiration and ideas, and one of them posted this image below: 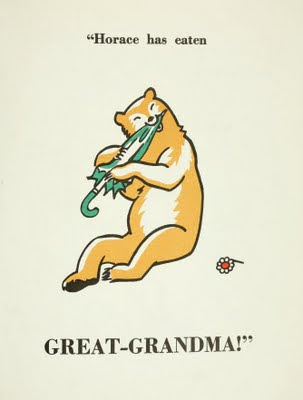 now, maybe i'm judging unfairly here but i suspect it takes a peculiarly uninteresting sort of person to read a page like "horace has eaten great-grandma!" with a picture of a bear nibbling at an umbrella and not be even a *bit* intrigued by what comes next

thankfully, archive.org came to the rescue. orginals of the book seem to be a bit tricky to come by (and we have heard tell of versions of it drawn by other people - my wife and i have become rather zealous in our evangelism for this book), but you can find it online here. i won't detail the plot because... well frankly by the time i have done so you could have read it and i PROMISE you i couldn't do it with the same level of wit and style and humour as alice m coats does 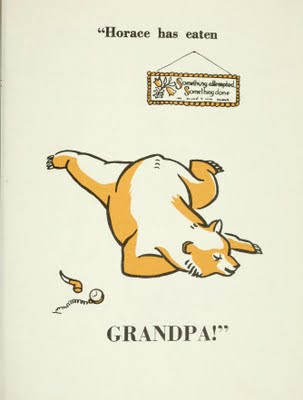 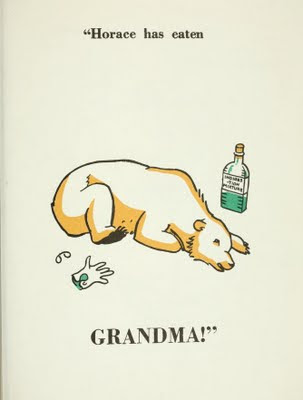 i will admit i know very little about alice m coats beyond what i can find online and mostly that is with regards to her more famous life as a gardener. yet she does seem to have popped out a couple of other children's books as a sideline. i've yet to find these because they're pretty much out of my price zone, but i do hope to discover them one day. but even if "horace" was her one effort in the genre, it would be enough to make her an all time hero of the form 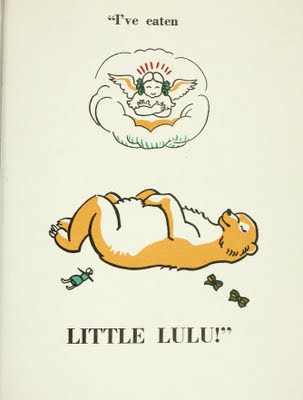 as a child i disliked any book with the remote whiff of self improvement about it. i liked something a bit more... dark or silly or mysterious i suppose. my preferences were pretty much roald dahl, the uncle books of j p martin, the mr browser books of philip curtis, the mcgurk mysteries (the british version i hasten to add - i was mortified to find an american one in my late teens), enid blyton (but only when poking around a castle or pursuing smugglers), tintin etc - all this was what i read before the grip of sherlock holmes, susan cooper, the three investigators and countless doctor who target novelisations set in. i liked things a little off beam and any book which seemed even slightly improving or had a looming moral got particularly short shrift. i can't really remember what my picture book tastes were, but what entranced me in the ones i can remember - the alfred bestall ruperts, the what-a-mess books of frank muir and joseph wright - were again the slightly off kilter stuff: the fact that anthromorphic bears lived in happily middle class co-existence in a typical english village or the strange details in the background of the what-a-mess books. it had to be something *more* than just a simple story for me

as such i'd have loved "the story of horace". i'd have loved how the dawning reality of what the book is about creeps up on you. i'd have been fearful we were up for maximum tweeness with the family set up at first, and then slightly bemused by the sudden twists and then absolutely DELIGHTED by the outcomes. part of the joy of the book is the way coats repeats the central joke so many times, and uses her pictures to build the joke. every time you have another "incident" involving horace and the family and the dad, the joke just grows and grows. also, i adore the way in which the family genuinely don't seem to be too upset by what horace is doing - every time they approach after father has gone out hunting (even the fact father still hunts after what has happened the *last* time he left the house alone is ridiculously funny) they look just as happy as they did before. just... well... happy but one less in number. and then the wonderful understatement of how much they all "took on so"... beautiful 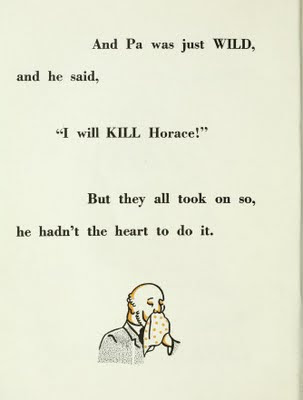 as much as the pictures are perfect (and they are - sparingly, beautifully drawn, all variations on what has gone before but also full of such life and humour), it's the choice of words that makes the book. "took on so" has become a catchphrase in our house, and the delightful touch of the phrasing on the last page of the book is (so beautifully phrased! coats is such a brilliant example of using sparing prose with maximum impact. if any of the text had been even slightly overcooked, the thing would collapse. it's a delicately written and drawn creation that really only works because of understatement. overstate the text or the art and it would be a lesser creation. something like "not now bernard" works because it is very much one kind of book (and drawn and written consistently in that manner) until the curveball that takes you to the end. this is what separates the wheat from the chaff, the true bits of genius from "lady milksops' magical geese" or whatever

and what can i learn from this book? that i'm nowhere near as good as coats. not even close. but it's good to have aspirations isn't it? 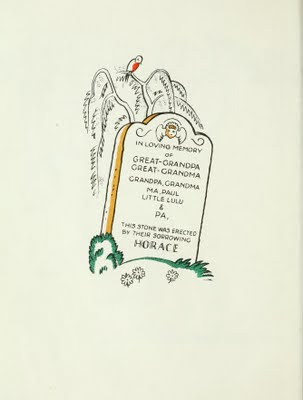