goodness - it's been a good seven months since i last updated this blog. there have been various reasons for this but they mainly boil down to three:

firstly i moved house, which in itself wasn't so bad as it was only two doors down the road... but still meant i have had to trim books and records and focus on housey things...

secondly, my dad's period of ill health peaked in may as he was hospitalised and eventually died. the disease - lewy body disease, a particularly nasty strain of dementia which combines alzheimers and parkinsons - claimed him in june so it's been a strange old time. i knew it was coming, but even then it's been a difficult time for me and my family

thirdly: in november i rather foolishly decided it might be a good idea to have a crack at a NANOWRIMO again. fifty thousand words in one month? easy. i had a nice, simple plot for a pulpy crime novel which i could use... what could go wrong? wel... 300,000 words later it's sort of rumbled to an end. sort of. because of the above two it's not as complete as it should be, but i took the end of july deadline offer of a free copy of a book from lulu as as good a point to finish the thing. it's about 90% finished with the rest of it in notes forms... so i know what's happening and where 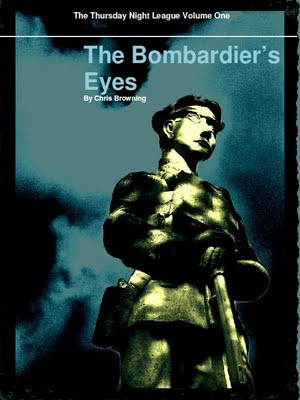 "the bombardier's eyes" is now available in overwhelmingly dense lulu form, but for those sensible types who want to wait until i've taken scissors to it and pruned it down there will by the end of this hopefully be a newer, easier to deal with version. because the idea of the book is to do a sort of tribute to pulpy british writers from the beginning of the twentieth century, i intend to issue "the bombardier's eyes" in a series of pamphlets/ booklets which will be illustrated and full of diversions in the manner of the first couple of issues of "the common swings". once THAT is done, there'll be a further edit and another version, hopefully the ultimate one, which will be the end of this damnable book!

but in the meantime, if you enjoy lulu type things, go here:

in the meantime, i'm going to hopefully spruce this blog up. i want to add more entries hither and thither and focus on it a bit more. i also have two new smaller projects i'm working on - one is a tragic children's story called "bunny mchuggles and bruiser mcgann" and the other is... a bit odd. i'll leave that til after the more normal one. it's a nice thing to think of twenty to thirty pages as your finishing point... rather than six hundred or so