Cat Getting Out of a Bag by Jeffrey Brown

The best review of "Cat Getting Out of a Bag and Other Observations" by Jeffrey Brown from “Big Deal Lucille” on Amazon.com: "I currently have 2 cats, lovingly referred to as "my boys". They are quite spoiled and healthy, physically and emotionally. In fact, one cat accidentally got outside recently, and not due to my neglect. I was so distraught I called in sick to work, cried most of the day, and did everything I could think of to find him. I hit the jackpot and found him 24 hours later. I've had cats all my life and I always will. I still think this book stinks, yes stinks. And I do believe the author of this book states he has no cats, but has known a few. Just because I don't agree with your glowing review, don't assume I'm not capable of being a cat lover. The world is not that simple. I'll give my cats an extra kiss tonight just for you." 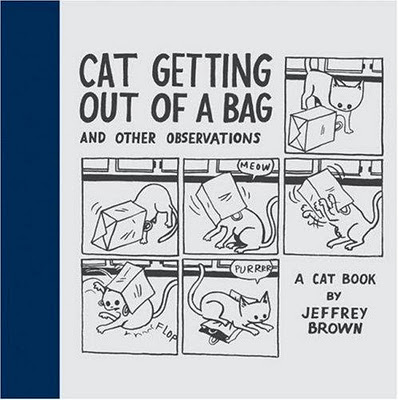 So anyway, now we have a cat at home. I grew up cats but I also grew up with something of a nascent mad cat lady: my sister. She currently has either five or six (I forget) including the only cat I have ever met with severe psychological needs. this cat would get up at three or four at the morning, mewl plaintively and drag a fritz the cat toy around with her that represented her lost litter she gave birth to when very young. She’d also sneeze a lot and leave a worrying brown/ grey stain on the wall but that's another story for another day. even a cat loving friend of mine when she asked to see this cat, to see if it was as bad as I’d made out, said of the photo "I can't see the cat - is it behind that lumpen, misshapen bag in the foreground?" without realising said bag was said cat. Anyway. I was stuck with this cat for six months or so and it kind of... put me off. But lately my wife and I have met some strange, crazed local felines who've changed both our minds on matters feline - and so we've ended up with Cluedo, a six month old bag of energy who is currently leaping into the air trying to conquer a ball of my wife's wool. 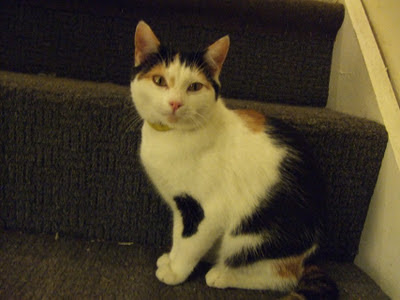 I’ve been a fan of Jeffrey Brown for some time now. I have been since I accidentally knocked into a copy of "Clumsy" in Forbidden Planet, Nottingham, and it fell on top of me. I kind of thought that I should take this as some sort of sign and bought the thing. And it ushered for me the first wave of my renewed interest in comics, particularly in this hitherto unknown format called mini comics. Something about Brown's balance between self-pity and self-ridicule (I picked up "be a man" at the same time I picked up "clumsy", which helped a lot) appealed to me where people like Chris Ware and Craig Thompson’s similar wallowing didn't (beautiful but whiny and self-important). I’ve been very loyal to his output since, but have left the cat ones out of my collection because, being catless, it didn't seem so relevant to me.

And now (Cluedo, should you be interested, is sat atop the telly and is idly batting at the head of Jeff Stelling, as well she should) I have a cat. So I thought it's as good a time as any to get hold of a copy of one of the cat books. And it is, rather predictably, brilliant. There has always been two sides to Jeffrey Brown. First there's the painfully self-lacerating, self-mocking autobiographical cartoonist who takes fragments of frequently staggeringly awkward moments in his life to weave together a greater whole. And then there's the tongue in cheek mocker of that sort of pomposity, especially of his *own* pomposity. That part also is the brilliant comic mind behind "big head" (which works, like "mega change bots", because Brown knows how ridiculous the real stuff is) and "I am trying to be small". And the cat book is the marriage between the two. As the other, better Amazon reviews point out - it's definitely no “Garfield” or “Simon’s Cat” (whatever their various merits may be). This is in every way what it says on the title page. Observations. But when is it anything but that with Brown?

And how good is it? Well, for a start the art is as great as it always is with Brown. Maybe it's because Brown is part of the pantheon of comic creators I’d like to one day compare myself to, but I’ve been looking at his art of ages now and am still amazed by how easy he makes something actually technically quite complicated seem. He’s an excellent draughtsman and his art has a spontaneity that only really works because of the scruffiness of his art but it's a scruffiness that belies a lot (and I do mean *a lot*) of technical skill. This book needs to show a cat in action and have it be recognisably a cat. There’s a lot of motion in the book and whereas my attempts to draw Cluedo have rather needed her to remain static, he's managed to knock off a lot of very accurate cat in motion comics at probably great speed. The real trick to Brown’s art is that his scruffiness is purely a stylistic decision. Like his most obviously similar peer, James Kochalka, it’s the best way to show immediacy and intimacy and build a rapport with the reader. The stilted beauty of a Chris Ware I find deeply alienating as if it’s a world dipped in aspic. You don’t get that with Brown. 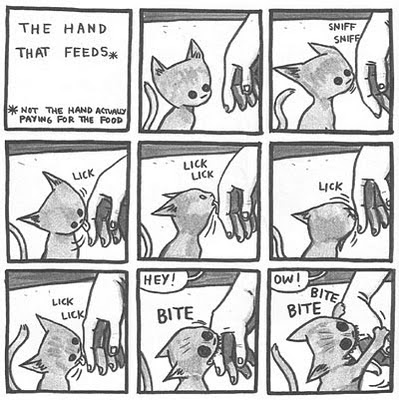 Okay. Cluedo does that. A lot. 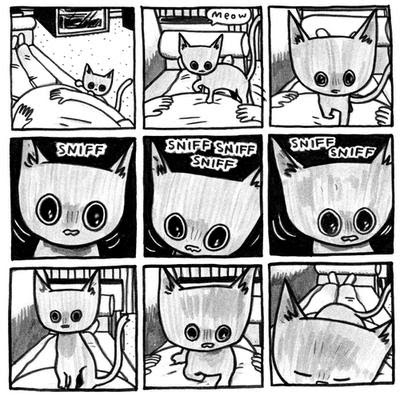 She also does this, especially at night. 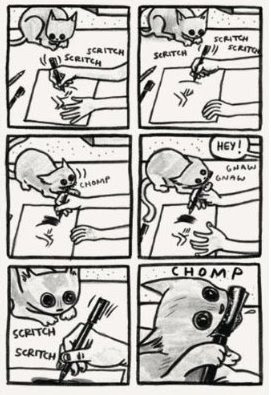 She did this the first time she saw me draw (and still does) and does it to Sarah when knitting too.

And she also, sort of, does this most of the rest of the time.

So this is where me and Big Deal Lucille sort of part company. For her cats are obviously more than just furry, food guzzling scruff bags who are as affectionate and caring as they are stand offish and stubborn. They’ve been elevated to another level of being where sentimentality has taken hold. Probably the simple fact that there’s a strip in this book about cat litter trays will immediately alienate Big Deal Lucille. She doesn’t want to think of that aspect of her cat’s life. Meanwhile Brown will continue to deal with cats as he does with everything else – as fragments of a wider story.

I have a weird fixation with “You’ve Been Framed!” during my most depressed periods. Not for me worries about people falling over cakes or throwing children into greenhouses - no. My worry is about the tumultuousness of my life in comparison with the moments caught on camera that otherwise would never be seen: a family holiday here, a barbeque there, a Sunday dinner, a stroll in the wind… moments of such banality for most of the time but for them precious snapshots of a wider story. That’s what depresses me – seeing people just living and living happily. And this book has a similar sort of appeal (as does most of Jeffrey Brown’s work). It’s about the moments in between the big moments. Life in microcosm. Unlike James Kochalka's more whimsical (but equally wonderful) "Peanut Butter and Jeremy" books, this is literally just a collection of observations. But sometimes all you want in life is to watch the simple, uncomplicated joy of a small bag of energy fascinated by the usually boring realities of a plastic bag. And that’s why this book is such a gem.
at December 12, 2011