so! you may be pleased to know that if you've bought a copy of ANY of the common swings recently, then the money has gone to a very good cause from this shop i treated myself to two sets of cigarette cards - the literary pets above and the military monkeys below, and TRUST ME these are two of the most incredibly beautiful objects i have ever owned. they are almost completely the dictionary definition of aspirational for me. the attention to detail and love in these things are incredibly. i cannot recommend them enough 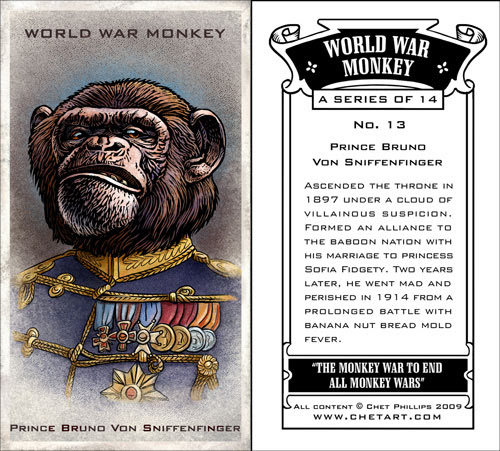 more when i wake up and feel properly better over the weekend (oh! and the nanowrimo has reached over 100,000 words! WOO HOO!)
at December 10, 2010 No comments:

review of the year: children's books

my first list is children's books of the year - particularly children's picture books. this year as i've slowly developed my style of art, i've been creating a massive folder of reference images on the laptop at home. these are for inspiration and for ideas and i've noticed increasingly they're from children's picture books. i've never really considered children's picture books since i've, well, stopped being a child although i must admit i have always had a soft spot for the art. a few have made their way into my consciousness, like jane hissey's gorgeous little bear books and "not now bernard" but other than that it's just been something i assumed wasn't really my sort of area to be bothered about until i found a copy of "george and martha encore" late last year. something about james marshall's ability to mix simple illustrations with genuinely *hilarious* stories really appealed to me and so i ended up forking out last christmas for "george and martha: the complete stories of two best friends" which is the complete output and is page for page some of the funniest stuff you could imagine. i think it's the fact marshall really does focus on the two hippos as friends - with their own particular foibles, in jokes and fall outs - that makes it work. the best story by far is one where george decides to ruin martha's dinner by telling her an "icky story". she repeatedly warns him against doing so, but he refuses to listen. she then tells him an even *worse* story which results in... oh i won't spoil it, but suffice to say it's one of the funniest single pages of a book i've ever seen. it's a thing of supreme beauty... another christmas favourite of last year, is a bit more like a children's book rather than a picture book although it is illustrated with some of the most *gorgeous* art imaginable (and even then it's a little... rich for many children in some ways). this is "the bears' famous invasion of sicily" by dino buzzati. i'd stumbled across a couple of pages of art from this book and fell madly in love with them. and the book is *incredible* telling of a campaign by the sicilian bears against the humans who have kidnapped the son of king of the bears (and also because the winter has knocked out their food supply). unfortunately it all goes a bit pear shaped and corrupt before the seemingly utopian bear kingdom is revealed for what it really is... it's a lovely book, very funny and full of rich, mad ideas. get the copy with the lemony snicket introduction as well as it really captures the tone of the book magnificently. oh! and NEVER FORGET the glorious, glorious pictures 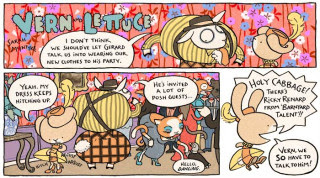 next up, something a bit more mordern with sarah mcintyre's "vern and lettuce". there's an argument to be made that this is the artist and writer that sort of tipped me off to giving mini comics a go again. this is because she used to have "vern and lettuce" serialised in the guardian's digest version of the lamented DFC comic at roughly the same time that audrey niffenegger's deeply tiresome "night bookmobile" was being printed in the review. one was leaden, obvious and predictable and the other... had anarchic small bunnies and a slightly overly worried sheep in it. i knew which i preferred immediately. she's been doing a lot of vaguely conventional children's books for a while now, but my heart really belongs to "vern and lettuce" because it's sweet, funny and brilliantly inventive. her blog - on livejournal no less - is also brilliant and i'm always very tempted to send her a copy of the hadrons as a sort of fan letter, but i probably never will. she's a genius though... a bit of a classic this time. i've been slowly appreciating more and more the work of beatrix potter, ever since i stumbled a book called "the art of beatrix potter" and realised what an astonishing draughtsman she was. i mean her skills as an artist are second to none, and realising that i went back to the originals and slowly began to appreciate them more and more. but it's "ginger and pickles" that won me over to considering her as a bona fide genius. it's basically potter does satire, with the titular cat and dog running a small village shop (lots of potter cameos from classic characters from this point) which is extremely succesful purely because it's run on credit. then they try and call that credit in (pickles needs a dog licence you see) and everyone is loathe to pay up. it culminates in a change in career for said dog and cat and possibly one of the funniest single lines in the english language: "And when Mr. John Dormouse was complained to, he stayed in bed, and would say nothing but "very snug;" which is not the way to carry on a retail business." a work of genius and available here on similar lines, but not quite a children's book, is the classic "a dog day: or the angel in the house" by walter emmanuel and cecil aldin which is basically "a diary of a nobody" with a dog. it's a spectacular bit of work, hilariously funny (witness the amount of times the dog claims to be "off his food") and really resonates with anyone with even the remotest fondness for pups. too many highlights to mention, but this is the sort of genius we're up against: "2.00 to 3.15 - Attempt to kill fur rug in back room. No good. 3.15 to 3.45 - Sulked. 3.46. Small boy comes in, and strokes me. I snap at him. I will not be every one's plaything." etc etc. it's a brilliant bit of lovingly observed comedy and, again, available here 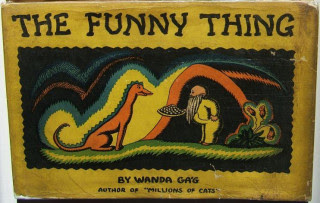 another classic writer now, one wanda gag. i stumbled across "the funny thing" in the local antique shop and was immediately taken with 1. the title, 2. the author and 3. the artwork. and it never fails to keep up to the heady standards of those three things. bobo, the hero, lives in the mountains and jollies his day by making food for passing animals. suddenly the funny thing arrives and claims to only eat dolls. bobo thusly sets about trying to trick it into a brand new diet. it's a brilliant book, a classic example of trying to get a simple message (picky eating) into something alltogether more hilarious and creative. you never once feel you're being lectured at, but instead you're being witness to an ever escalating series of mad ideas. "the ABC bunny" is pretty great too 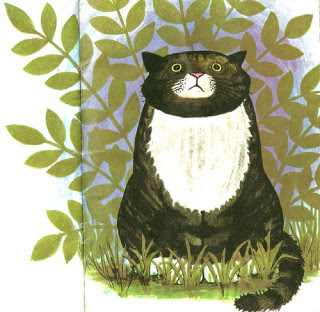 one more classic writer and that's judith kerr. i was always going to love the wife of nigel kneale wasn't i? and it's hard to pick just one book out of the output. probably "the tiger who came to tea" is the best of the lot, and "goodbye, mog" the most affecting (probably the best single representation of mortality in a children's book ever) but my favourite is the first: "mog the forgetful cat". i think this is because it sets up so beautifully what's to come - mog wanting an easy life, mog prone to idle dream sequences, mog eventually (and frequently by accident) becoming the hero. mog is such an expressive creation and the family are beautifully observed. i unequivocally adore all these books and cannot recommend them enough 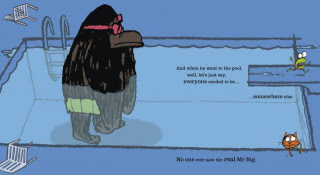 a more modern classic now which gets in because 1. it's about jazz and 2. it's got a big monkey in it. there's definitely a slight suspicion with me about some modern children's writers that they're frustrated graphic artists going for an easy penny and selecting their most appropriately child like work and then working some rather twee narrative around the pictures. this book could be VERY close to that with it's big, modern, chunky artwork but ed vere's "mr big" works so well because it's so full of lovely, warm, slightly melancholy comedy and secondly has a great, not too cheesy or flippant moral at the end. basically mr big is a gorilla who is very lonely and can only express this through his jazz trumpeting. needless to say everyone who is scared of him in daily life feels *very* differently about him through his music. it's a lovely piece of work and the art is spectacularly unique. i can imagine dozens of rip offs of this quite easily, but the original is so good it will always stand out as a work of art 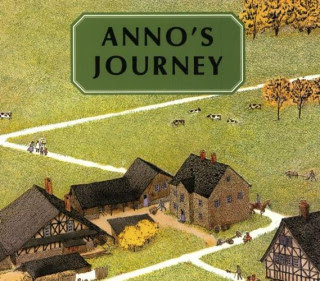 and finally? "anno's journey" by mitsumasa anno. i picked this up on saturday having vaguely remembered looking at it when i worked in lincoln and - dear god! it's a thing of serene, almost zen like beauty. it's like a tremendously slow moving, historical "where's wally" with various historical characters tucked away in the corners of these beautifully designed pages. anno wordlessly crawls through historical europe and it's such a gorgeous, gorgeous journey. these pictures are stunningly draughted and, again, you can imagine so many cheap rip offs of this style none of which could even come close to the supreme, peaceful beauty on these pages

can you tell i want to write children's picture books very badly?
at December 02, 2010 2 comments: