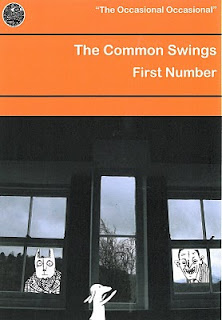 the spangly proper lulu edition is ready! TREMBLE WITH FEAR!
at March 23, 2010 1 comment:

i've always slightly been in awe of artists with notebooks. you see on their blogs all these brilliant, brilliant images cast off seemingly so easily and think when you look at your own page of nonsense... how can they be so effortlessly gifted?

well... i am now offering for the first time pages from my own notebooks which are effortlessly... copied from things on the internet. effortlessly... filled with lame puns and half baked ideas. effortlessly... full of much effort and hopefully belying the fact i've only copied select pages from a bulging notebook the rest of which is frankly all pretty much nonsense. but i hope these bits are fun at any rate... enjoy! 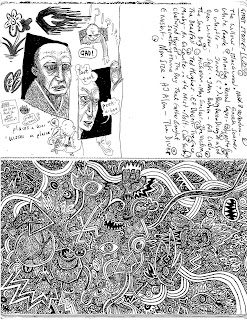 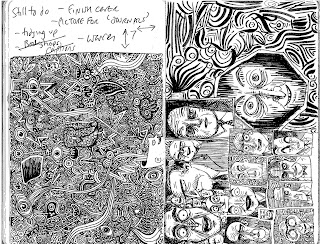 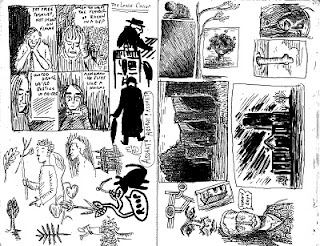 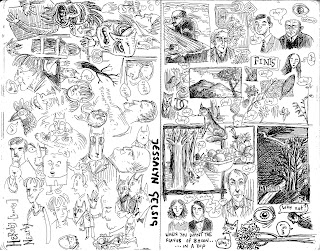 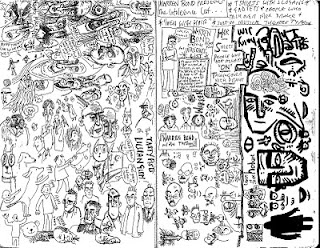 I am interested in obtaining a copy of Modern Dissonance July 1976 issue - Apparently there was a fascinating interview with the reclusive triangle player Horst Fuerhereren. It detailed his life growing up in Ogburg to dwarf parents, his longing to be taken seriuosly on the Triangle club circuit, the heady days playing to sold out railway waiting rooms in Scotland and his eventual decline into mediocrity and appearances on "Ready, Steady Slow", the radio programme for people who struggle to hear quickly.

Let me know if you have it

I find myself somewhat bemused and a not a little offended by your correspondence date 11th March 2010, 13:57. I do not wish to decry a new acquaintance as a practical japester of the sort much in vogue with the lower classes, but I find myself unable to accept any other reason for your extraordinary missive.

Firstly, as any collector of Modern Dissonance will know, there was never a July 1976 issue. This was due to an ill fated attempt in March of that year to rebrand the journal as Modern Assonance magazine. Similarly anyone aware of this sorry incident in Lord Beany's publishing career will know that in October 1976 the magazine reverted to the original name after legal wrangling involving the well know children's character, and property of the ever litigious Milk Marketing Board, Gustav the Assine Ant.

Secondly, as any one with even the most basic knowledge of triangle players of the 1970s will know, Horst Fuerhereren had been drummed out of even the most lax of triangle playing unions after his infamous "going electric" performance at the Newport Pagnell Folk Festival in 1975. His experiments with electric and steam powered triangles rightly caused a fury within the triangle playing community and he is now considered a complete outsider, performing in small scale fusion bands with a pick up band including "Admiral" Barquo Wemslow on spoons and Golden Barry Selmwig on the alpine horn. This sort of nonsense is frankly frowned upon by Associated Mallards and it is of no surprise to us that the trio - under the name "Taste the Wind" - have been recently sponsored by, who else!, the dreaded Milk Marketing Board.

We are however about to issue a part work for the series "Ready Steady Slow", which comes with free iron girders with which you may erect the famous sound trumpet of Dr Jonty Q Vorhelm over the course of the magazine's publication. Once erected, it will provide a handsome feature for any house with which to play again and again cherished episodes of "Ready, Steady, Slow" - including pre-electric Fuerhereren.

Don't hold out on me - I see Horts's rival, Mitchell Wanger (The Triangle-Banger) has got to you too. Why oh why can't he excel in the Triangle sphere through sheer persistence and ingratitude? Why must he poison and defile those around him with spurious lies and angry denials? Horst clearly has the most talent I've seen for a long while, and so I implore you to issue this issue to me so that we can settle this issue without further issue. I have friends in spry places you know...

Experimentation is all well and good in theory but in practice? I mean who regards such records as Thaddeus Tamquist's "A Hootenanny of the Aeons" anything like as highly as Braden Whiskyfeet's masterful opus "Triangles, Prisms, A Kitten and Lord O'Reilly's Backpack?" I cannot help that such experimenting gadabouts as Fuerhereren, Tamquist, Zak Harare and the Rhubarb Forcer and the Anthony Trollope Blues/ Triangle Marauders seem so willing to disguise musical inability with shock tactics and "experimentation". Wanger, Whiskyfeet and Buster Merryfield's Button Boys are the true home of traditional triangle playing - and long may they do so!

Dear Minty, the absurdity of your thinking re the triangle music art form offends all but the puniest of minds.I am amazed you can even find the right kind of wax for your moustache in the morning, or that you have ever conversed with the legendary Horst, because frankly Sir, you are to Horst, what acorns are to figs.

I bid you good day. 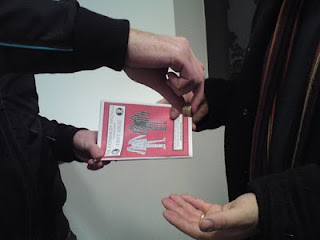 so... a little history

some twelve years ago now, a friend at university played to me with visible glee a rather nondescript flexidisc he'd found lurking in a charity shop. it was put out by the open university, britain's premier distance learning organisation, and on first listen seemed to be little more than a jolly, if rather bizarre, series of folk songs for children. but then... this one singer came on who just seemed to be *not quite right*. there wasn't anything discernibly wrong with him, but he just sounded... a little too severe, a little too testy, a little too grumpy and even a little too camp to pass as harmless comedy fluff. his handful of songs stood out for this faint air of menace, giving off this image of a man who probably believed himself to be a born educator and entertainer for children but deep down probably felt he was slumming it. and the apex of this record, the most bizarre and unsettling moment of them all, was a folk song called "we will go to the common swings". certainly it wasn't any kind of folk song i'd ever heard of before, but what seared it into my mind on first play was how sinister the man made these common swings sound - so that you spent the whole duration wondering whether it was a location or simply a class issue

i taped the record (stupidly fiddling with the speed every now and then because i foolishly thought this would make it funnier - nothing of the kind. it ruined the thing really) but have long since lost it. but that one song... that one vivid and peculiar song has never left me. the image of "the common swings" became so vividly bizarre and unusual, that i sort of co-opted the title as to be used for an ongoing project of uncertain content. at first it was a fanzine, based solidly on my view that there was nothing funnier than very tenuous puns on rock stars and british comic characters from the 1930s to 1950s. that died on the vine. then it was to be a webpage of some description, again with vague puns and badly written reviews of whatever enthused me that day. that vaguely struggled into being for a few weeks and then, similarly, died a death. then it was a more general thing for a while - an aim to be spontaneous and just jot down a week's worth of ideas and have some product at the end. it became soon very apparent that i didn't do spontaneity very well. so that died a death as well (although i do have a lot of it still lurking around the place. it's very odd and seemingly 70% obsessed with the idea that jandek is intrinsically a very funny subject for comic strips. worry not - they won't be seeing the light of day in any hurry). and then it just became... well, basically a stick to beat my own back with. this looming title of never discernible content that i just never finished. at all. ever

and then blow me down. if i didn't go and complete something. various little amusements all seemed to come together and as it was basically ten years since i first had the idea to do something under the title of "the common swings", it was wheeled out again. but this time... this time, it's actually finished. something special. something tangible. something you can hold in your hands and read - well less read, more squint - at your leisure. and here it is. for you. to enjoy, or at least gaze at quizzically for as long as you see fit

i hope you enjoy it

and as a rather nice coda to this story, the woman i get a lift home with from work was telling me about a month or so ago of an unusual record a friend of hers had picked up. she knew i liked my odd records and thought i might be interested. some sort of open university flexidisc of undetermined origin with strange, unsettling folk songs for children on it... needless to say once i get my hands on it, i'll be ripping it to mp3 so you call join me on a trip to the common swings
at March 06, 2010 1 comment: